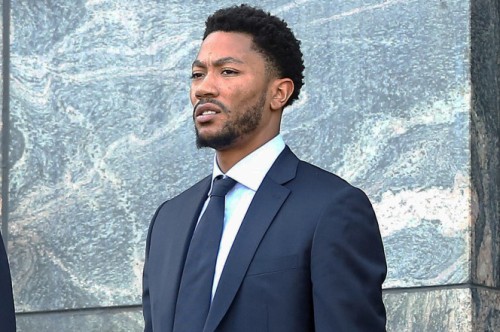 I am a proud Chicago sports fan.  In many years, that is a quite disappointing fandom, this one included.  The White Sox drastically under-performed expectations.  The Blackhawks got knocked out of the play-offs in the first round for the first time in forever, and they’ve started this season very poorly.  The Cubs have been perennially bad for a very, very long time (though are good this year, which is a major conflict in my White Sox-leaning heart).  The Bears had a horrible 2015 season, and have started off this new-year on a bad note by losing in very ugly fashion.  The Bulls missed the play-offs this past season, too, but initiated a roster turnover this off-season to help improve, and the featured move of that turnover was the trade point guard Derrick Rose.

Back when the Rose trade was announced, I wrote a post honoring his time in his hometown uniform, about how great he was for the city, both on and off the court.  Now, I am starting to regret some of my words.  Part of that regret can be tied back to Rose’s comments about the city not “appreciating” him, or on how the New York team that he finds himself on now is the most talented one he’s ever been on.  But most of it stems from the current rape accusations that Rose and two of his friends are facing in Los Angeles.

For those of you unfamiliar with the case, a woman filed a civil suit against Derrick Rose about a year or so ago, with the complaint being that the point guard and two of his close friends drugged her, trespassed into her apartment and gang raped her while she was unconscious on Aug. 27, 2013.  The case has been in the trial phase for about a week and a half, and has garnered much national media attention for the drama that seems to be unfolding within the courtroom.  (For more in-depth information on the case, please click here).

Rape is one of the biggest problems in our society.  7% percent of all rapists are convicted, which is a very, very small number considering the seriousness of the crimes.  Many of those rapes go unreported, for a variety of different reasons from the understandable embarrassment that a victim might feel to the truly horrifying reason of being afraid of victim shaming (which, sadly, happens all too often).  Other cases are thrown out due to “lack of evidence,” or some other preposterous rationale that gets the criminals out of punishment.  Some stories are genuinely made up, sure, but jumping to the conclusion that the person accusing someone of rape isn’t telling the truth is a horrible, horrible mistake to make, considering how many of them are real cases and how many rapists do not end up with proper punishment.

When it comes to sports, many athletes, unless they are strangely reviled, are often given the benefit of the doubt when it comes to making a major mistake.  People assume that because they are athletes, because they frequently in the public eye, that they can do no wrong.  When athletes are accused of committing a crime, no matter how heinous, many thousands of loyal fans will often leap right in to defend the athletes, and some continue to defend them for a long period of time, regardless of what evidence has been presented.  For all that I know, Rose may completely innocent of rape.  His accuser may be someone attracted to Rose who didn’t get her way but still wants to be in the spotlight.  However, I can’t find myself believing that that is the case.  There have been some very viable attempts by Rose’s defense team to discredit Jane Doe’s reason for accusing the point guard of rape, but considering the negative publicity that she is sure to be getting from many of Rose’s most vocal supporters, I feel that she is probably not in it for money or fame, but for justice.  Rose’s vagueness in answering questions concerning the night being brought into question is also pretty telling for me- he created more questions about the turmoil surrounding him.  Rumors about an out-of-court settlement of been floating around, as have rumors of when the grand jury in his case will actually convene; regardless, it really hurts to think that one of my hometown’s biggest stars may have just thrown away his career, especially deciding to engage in something is terrible as sexual abuse.

Sadly, many athletes besides Rose have been accused of some form of abuse in recent years.  Among them, former Baltimore Ravens running back Ray Rice was filmed on tape hitting his wife in an elevator before dragging her out of it.  In December of 2014, professional basketball player Jeffery Taylor was suspended by NBA Commissioner Adam Silver for 24 games after being convicted of domestic assault.  The following month, former pro baseball player Milton Bradley’s appeal of his sexual assault charges was dropped, meaning that he had to serve jail time.  In June 2015, retired NFL safety Darren Sharper pleaded guilty to drugging and raping three women in different cities across the country.  Los Angeles Kings defenseman Slava Voynov faced deportation to Russia after being convicted of a misdemeanor violence charge against his wife last fall.  These cases, along with Rose’s, have received a lot of media attention.  Some people have complained that they have received too much attention, that the focus on the athletes takes away from attention that should be being paid to the people getting abused that won’t make the headlines.  While they are right, I think that there is something else that these people should be complaining about- why professional leagues, and their teams, are not going above and beyond to combat this abuse.

Professional athletes are some of the most prominent role models in the entire world.  For that, they are held to a higher standard when it comes to personal conduct.  To me, that means that the leagues that these athletes are a part of, and, as an extension, the teams in that league, must also commit to a higher standard of conduct.  Pro sports are a vehicle for many, many great things- the NFL is relatively racially sensitive.  Both the NFL and MLB have been big promoters of breast cancer research.  The NBA has NBA Cares, which runs many local programs for underprivileged kids.  The NHL is working hard at improving the safety of hockey players, from youth levels on up.  However, when many of these professional leagues have been faced with crimes involving abuse, many of them have not done the right thing.  Some leagues have made mistakes with punishment- NHL commissioner Gary Bettman has made comments denouncing the acts of Voynov and the (supposed) acts of Patrick Kane, the Chicago Blackhawks star who was accused of rape before last season, but Bettman permitted Kane to attend the Blackhawk training camp and allowed Voynov to practice with his team while being investigated (the fact that the Kings were open to Voynov practicing in the first place is bad in its own right).  NFL commissioner Roger Goddell’s punishment of Ray Rice was not properly considered and was eventually overturned.  A problem faced by all pro sports leagues, though, particularly the MLB, which has had many former players convicted of crimes involving abuse, is that, just like most major media/advertising entities today, they done poorly with condoning crimes involving abuse, and making awareness of abuse and abuse a major talking point.

That isn’t to say that sports leagues and teams have done nothing to combat the problem of abuse, but considering the seriousness of abuse, it’s one that hasn’t been addressed enough.  Chicago sportswriter Jon Greenberg made a fantastic point in his article on the situation surrounding Kane and his rape controversy last year.  He wrote, “The Blackhawks could help combat sexual assault before it begins by funding workshops, clinics and speeches for this age group. They can help talk to the kids about sexual assault when they’ll still listen.”  Obviously, with Kane’s case being sex related, Greenberg’s thought is a little more specific than targeting all forms of abuse, but, in the grand scheme of things, it’s a great idea.  D.A.R.E programs are instituted in elementary and middle schools across the country- including my hometown, a suburb of Chicago- to teach kids about the dangers of drugs.  So why can’t there be a more widespread, and more impactful, curriculum on abuse, better than the Robert Crown programs that have such limited influence?  And why does it have to be just one pro organization, a team that may happen to have a player under investigation for sexual assault- all professional sports leagues can make a point to prove that this is a major issue.  And shouldn’t adults be targets of a similar message, too?  Just like there are major campaigns involving not drinking or texting while driving, there should be more commercials, and more athlete spokespeople, speaking up about the terrors of abuse, and encouraging victims to seek help, and providing information on how victims’ friends can assist in efforts to make sure the victim recovers and the abuser gets his/her proper punishment.  Considering how big of an issue abuse is, and considering how high profile athletes are, bringing light to this issue will make people more vigilant, and more informed, about abuse, which is something that our culture, in or out of athletics sorely needs.