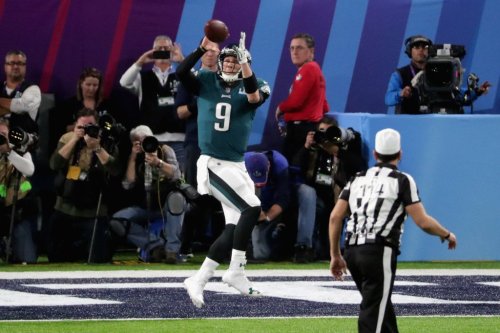 It was an offensive explosion, back and forth for the entirety of the game, but in the end, it was the backup forced into the action by an injury to a star that prevailed, as the Philadelphia Eagles prevailed in a dramatic 41–33 contest against the New England Patriots.

Both teams started off fairly well, as both the Pats and the Eagles turned in first quarter drives that went 67 yards, each of which resulted in field goals.  Just like last year, though, things really took off in the second.  After Philly scored a touchdown (and missed an extra point) late in the first, Tom Brady led his team right back down the field, only to see the resulting field goal attempt by Stephen Gostkowski bounce off the left upright.  Nick Foles and company continued their dominance of the New England defense, grabbing a 15-3 lead on a drive culminating with former Patriot LeGarrette Blount pounding through some of his old teammates.  That seemed to wake New England up, as they scored on their next two possessions, sandwiched around an Eagles interception, to get them back within a score.  The Eagles, though, came back to grab the momentum going into the half, scoring on a fourth down trick play that saw Foles catch a touchdown pass from backup tight end Trey Burton.

The third quarter continued the theme of non-existent defenses, as every possession resulted in some sort of points.  Rob Gronkowski, who only caught one pass in the first half, became much more active in the second, catching his first touchdown to bring his team back within a score.  Foles, who won MVP and was brilliant in relief of the injured Carson Wentz, came right back with a perfect through to backup running back Corey Clement to restore the 10 point lead for the Eagles.  Brady, though, was not to be denied; he followed up the Eagles’ touchdown with a great throw of his own, to Chris Hogan, and following another Philly field goal, he tossed one up for Gronk to allow the Patriots to take their first lead of the game.

Foles stepped up to the plate to get his team back in it, finding star tight end Zach Ertz for a touchdown with just over two minutes remaining.  That left a lot of time for Brady, though, and the star veteran had a chance to step up and lead his team to victory.  However, the Eagles defensive line, which was fantastic throughout the season but had been held largely in check for the game, finally got to Brady; captain Brandon Graham got into the backfield and forced the legendary quarterback to fumble the ball back to the Eagles.  After yet another Philly field goal, the Pats were able to get the ball back with one last shot to tie the game, but another valiant effort from the Eagles’ defensive linemen prevented Brady from securing another comeback and sealed a victory for the underdog Eagles.